The festival of Navratri is very colourful and vivacious. All across the country, the celebrations of Navratri are carried out by fervor but in West Bengal, Navratri is the biggest and the most important celebration of the year. Here Navratri ‘nine days’ is celebrated with huge dedication, pomp, and sparkle, but the last four days from ‘seventh day to tenth day’ is the most important for the people of West Bengal. People celebrate Navratri as Durga Puja in the all cities of West Bengal in India. During Navratri, Maa Durga descends to Earth from heaven. People do worship nine forms of Goddess Durga and she blesses all the devotees with prosperity & happiness and removes ignorance & evil from them.

Goddess Durga is the main deity of Navratri in West Bengal. The name “Durga” means “inaccessible”, and the destroyer of the evil. The other names of Goddess Durga are Shakti, Parvati, Mahishasuramardini and Gauri. In a portrait, you can see Goddess Durga has many arms (eight arms) and carry weapons in each arms. Lion is the vehicle of the goddess Durga and according to old history she has all the eight siddhis.

In West Bengal, devotees worship Goddess Durga in the form of Durga Puja which implies triumph of good over evil. The idols of the Goddess Durga assassinating Mahishasura are set up in pandals everywhere. In various huge pandals, the clay idols of Maa Durga’s son Kartikya and Ganesha are also set up along with him and worshipped dedicatedly. During navratri celebrations in West Bengal, Several cultural festivals comprising dance performances, dramas, depiction of the legend of Goddess Durga and Mahishasura, are organised throughout West Bengal. The festivities continue for four days and finally on the last day, the idol of Goddess is taken out on an opulent procession and immersed in the water. The tenth day is signified as “Vijaydashmi” or “Dussehra”. Vijaya Dashami is marked with ‘Sidur Khela’ where the married women, wearing red and white or yellow and red saree, smear vermillion on the forehead of the idol of the Goddess and other married women. During auspicious time of Navratri festival, devotees in large scale go to Dakshineswar Kali Temple in Kolkota, West Bengal.

On the sixth day of the Navratri, ‘Shasthi Puja’ is organized while on the ninth day ‘Ayudha Puja' is performed. In Ayudha puja devotees place the tools and small children put their study material (books and writing tools) on the alter start worshipping. On the tenth day Goddess Saraswati puja is accomplished to get blessing of wisdom and peace of mind.

West Bengal is a must visit destination at the time of Navratri season to get blessings of Maa Durga as well as a enormous celebration with devotion, music and dance. All the cities of West Bengal are decorated as bride and people’s happiness & zeal are on the peak. During Navratri festival, tourists come here for enjoyment and participate in grand puja of Goddess Durga with great devotion. Navratri celebration in West Bengal shows the rich culture and spiritual values the state. 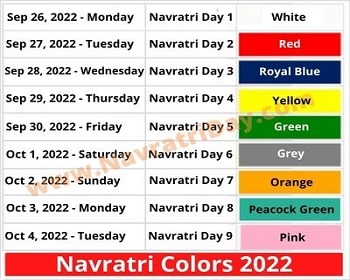