An embodiment of Shakti, Goddess Parvati is the consort of Lord Shiva and mother of Ganesha and Kartikeya. Resembling her husband, the Goddess too has both terrible and mild aspects. She is called by different names and each one features a distinct significance. She is beautifully depicted in the Hindu literature as the divine sisters of Ganga, daughter of Great Himalayas as well as a mediator in the disputes of heaven. In Hindu mythology, she is a feminine form of energy.

The Birth of Goddess Parvati: 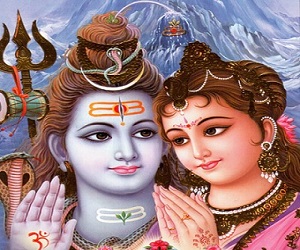 When Devi Sati left her body, Lord Shiva spent all his time meditating in the caves. During the time, a demon called Tarakasura pleased Brahma with tremendous austerities and received the boon of being immortal. He was blessed that only the son of Lord Shiva would kill him. Thereafter, the demon became the ruler of three worlds. The Gods made a plan and requested Devi Sati to come back in her body. They went to the Himalayas and began a yagya, chanted the mantras, and made offerings as well. Pleased by the yagya, Maa agreed to their request. She was born in the home of Himalaya and became Shailaputri, the daughter of mountain. She performed Tapasya, pleased Shiva and married him.

The Beautiful Appearance of Goddess Parvati

Goddess Parvati is the consort of Lord Shiva and she is depicted with two hands; the right one holding a lotus and the left hand is kept loose by the side. When she stands independently, she is represented with four hands; the two hands are shown holding blue and red lotuses whereas the other two exhibits Abhaya mudras and varada. Goddess Parvati depicts a peaceful personality and she is adored for leading a happy married life. The image of Lord Shiva and Parvati with sons Ganesha and Kartikeya depicts unity and love amongst the family members.

Other Names of Goddess Parvati

According to mythology, Goddess Parvati has many names. Devotees call him by the name of Dhumavati, Kali and Bhairavi etc. Check the Goddess Parvati names and little description about them.

- Her first name is Kali. She is the Goddess of time who destroys everything. - She is also called as Tara, a power of golden embryo from where the universe is said to evolve. - Sodasi, personifying perfection and fullness is her third name. It literally means one who is sixteen years old. - Vidya Bhuvanevari is her fourth form. She stands to depict the forces of material world. - Bhairavi depicts temptations and desires that lead to death. - Vidya Chinnamasta is her sixth form that personifies a state of self-sustenance. - Dhumavati stands to destroy the world by fire. - The eighth form, Vidya Bagala is a crane headed Devi that depicts the ugly aspects such as hatred, jealousy, and cruelty. - Matangi stands as power of domination. - Vidya Kamala is the last form of Parvati that stands as the pure consciousness of oneself.