Religious festival Navratri is a famous and sacred festival of nine nights for Hindu community in India. It is the nine days festival dedicated to Goddess Shakti. The Goddess Shakti has 3 forms those are Durga, Laxmi and Saraswati. These Goddess are worshipped during the nine auspicious nights of Navratri festival with great fervor and happiness in all over the India. The Navratri festival may be held for a day less or a day more depending on the calendar.

In Sanskrit Navratri literally means - “Nava + Ratri” that is ‘Nava’ means ‘nine’ and ‘ratri‘ means ‘nights’ so it is called “Navratri”. 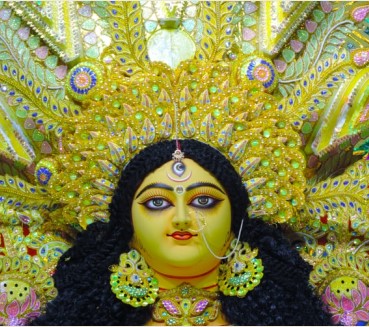 This festival is celebrated in a different manner in all over the India and worldwide. In West Bengal and Gujarat, Navratri is one of the most famous festivals of the year. After Durga Puja people perform and enjoy Dandiya and Garba Rass dance in groups. In Sharad Navratri, after nine days of Navratri, another festival “Dussehera” also known as Vijayadashami is celebrated with great enthusiasm by the people because this day signifies the victory of Good over Evil (Lord Rama killed demon Ravana).

Why Navratri is Celebrated:

The legends of Navratri are Maa Durga (Goddess Durga) and Lord Rama. Goddess Durga got the victory on demon Mahishasura (buffalo faced demon) after nine days fight and by killing him on the tenth day. This festival signifies the triumph of good over evil. This tenth day of the victory is known as Vijaya Dasami (Dussehra).

Another legend of Navratri is Lord Ram who wanted to get the blessings of Goddess Durga (Goddess Shakti) before beginning the war with Ravana so he worshipped nine aspects of Goddess Durga for nine days to collect the strength and power.


Nine Goddess and Days of Navratri:

Sharad Navratri 2020 dates are lying from 17 October to 25 October. Nine Goddess are worshipped during Navratri festival and the name of those nine Goddess according to Navratri days are -

Chaitra navratri is the begining of summer season and end of winter season. It is called the auspicious day because at this time, the sun enters the sign Aries of the Zodiac. This auspicious day is known as Hindu New Year. Sharad Navratri is the starting of the winter season in India. This time celebrate Sharad Navratri 2020 with great zeal and devotion to get the blessing of Goddess Durga. It is said that he/she who worships Maa Durga and do fasting during navratri, always remains healthy and happy in his/her life.

During Navratri festival, devotees worship different form of goddess on each single day continuously till nine days. During nine days, people wear specific and auspicious colours attire daily and offer nine different Bhogs to different Goddess until nine days. Devotees keep fast for nine days or first and last day to please the goddess and get the blessings for happy life, health, wealth and prosperity. Before breaking the fast devotees need to worship nine small girls who are represented as nine goddess of navratri, feed them good food or halwa & poori and then give them some gifts & money. Many people participate in dandiya and garba dances, organized at various pandals during navratri time. At many places, people organized the Navratri Jagran, in which singers sing the devotional songs and bhajans.

Sharad Navratri is the perfect time to get the blessings of Maa Durga. By worshipping nine forms of goddess Shakti with full devotion, keeping fast for nine days and reciting mantras, one can please the goddess and get the blessings of wisdom, health and wealth. Know the sharad navratri 2020 dates and prepare your schedule in advance.